​St.Basil's Jacobite Syriac Orthodox church - Sacramento is a dream-come-true for a few families live in this area to worship and celebrate holy Qurbana in ancient syrian orthodox tradition. The Church was found in 2015 by 7 families and since then we grew in members. St Basil's Church is under the Malankara Archdiocese of Syrian Orthodox Church in North America and under the Apostolic Holy See of Patriarch of Antioch and All the East. The Church services are in Malayalam-Syriac-English languages.

We started our Church in 2015 at a rented facility near Sacramento downtown. Since then we rented couple of facility as our Church grew.

On 2019 August, we were blessed to have our own Church facility in Sacramento. Our new Church was consecrated by His Eminence Mor Titus Yeldho on October 2019, on our Church feast of St.Baselius Yeldho. 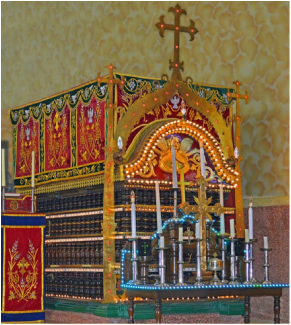 Our church is named after St. Baseliose Eldho, who is entombed at Kothamangalam Mor Thoman Cheriapally in Kerala, India.

Maphriyono Mor Baselios Yeldo was born at Karakosh near Mosul in Iraq. He become a monk in Mor Bahnan monastery in Mosul. The saint came to India via Basra to Surat, after consecration as Maphrian (Catholicos / Maphriyono) by the Patriarch Mor Ignatius Abdul Messiah I, arriving at Thalassery in North Kerala, then by hill route to Kothamangalam in AD 1685 at the request of Marthoma II of Malankara Church.

There are several stories of the miracles that happened during the saint's hazardous trip to Kothamangalam. This was the time of extreme persecution by the Portuguese; so they had to be vary careful. Portuguese have already said to have murdered a Patriarch. So, for their safety, the saint travelled from Thalassery to Tamil Nadu and then travelled westward to Kerala.

He said to have saved several villagers from heavy flood at Pallivasal near Munnar.

From there the saint, accompanied by the Episcopo Ivanios, came to Kozhippilli village near Kothamangalam. When they realized that they had reached populated areas, Bava decided that it was unwise for both to travel together any further. He asked the Episcopo to climb a tree and hide himself while the Saint proceeded on foot. He eventually reached the banks of Kothamangalam river at Chakkalakudy. He saw a Nair (Hindu) man tending cattle there. Through symbols they communicated and the man conveyed to Bava that there was a Church nearby.

Bava asked him to show the way to the church. The man expressed his inability to do so since he could not abandon the cattle. The Saint is said to have taken his walking stick and drew a big circle on the ground. Then he asked the man to take all the cattle into that circle and told him that they will save safe inside the circle. The Hindu man realized that Mor Baselios Yeldho was a man of God. The man's sister was at that time in severe labor pains. He told the Bava about this. The Saint asked him for some water. The man thought that he was asking for water to drink. He tried to climb a coconut tree nearby. The coconut tree is said to bend so he could pick the coconuts easily without climbing!

The man is said to have taken two tender coconuts from the tree and gave them to the Saint. The Saint blessed one of the tender coconuts and asked him to rush home and give it to his sister. Bava waited for him there. After about one hour, the man returned with the good news that his sister had given birth to a boy. He also noticed that all this time, the cattle haven't strayed out of the circle drawn by the saint.

The Hindu man gladly accompanied the Saint to the Kothamangalam church. To this day, during the perunnal celebrations in Kothamangalam, the rasa (procession) is led by the descendants of the Hindu family.

The saint reached the church premises on 'Kanni 11th' in the Malayalam calendar (end of September), AD 1685. It is believed that the church bells began to toll when the saint arrived at the church.

On the feast of the Holy Cross,('Kanni 14' as per the Malayalam calendar), Episcopo Mor Ivanios Hidayatulla was consecrated as Metropolitan after the Qurbono by Mor Baselios Yeldho Bava. Because of the tedious journey and the old age, Bava was totally exhausted by then. Three days later he became seriously ill. On Kanni 17th, he received the last sacraments of anointment with oil and extreme unction.

On Saturday, Kanni 19 (September 29) in the afternoon, the saintly father left his mortal self for his heavenly home at the ripe age of 92. The huge granite Cross on the west side of the church miraculously lit up at the time of the Saint's demise. The saint's mortal remains were entombed on the next day (Kanni 20) in the western side of the Madbho of the Kothamangalam church.

Though the Holy Father had lived in Malankara for only a few days,his name has spread far and wide leaving a lasting mark in the history of Malankara Syrian Church.